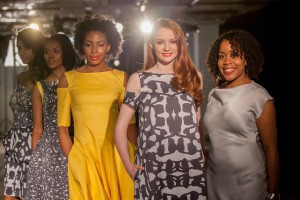 Imagine yourself, sitting front row at a swanky Washington, D.C. fashion show, gazing at a new collection of beautiful garments moving swiftly down the runway. The show concludes and the designer, Kim Elleen Atkins, presents herself. She is a ravishing young woman who appears right at home when standing on the runway surrounded by her creations. Little does the audience know, she is not your run of the mill fashion designer. By day, Kim works as a journalist covering the Supreme Court for a group of legal businesses and newspapers. By night, she is busy designing and creating pieces for her fashion company known as Kim Elleen. She is a prime example of what can happen when you kick fear to the curb and follow your passion wherever it leads you.

Growing up with a mother who was a seamstress, Kim learned at a young age how to sew and create clothing. In adulthood, she pursued a career as a lawyer and then turned to legal journalism, which she has been thriving at since the year 2000. She had never considered following in her mother’s footsteps until she attended a ball during the most recent presidential inauguration and realized she was wearing the same dress as seven other women. “After that, I started making clothes for myself. I was dissatisfied with the selection of clothes that I was given, especially for special occasions”, said Kim Atkins, designer and creator of Kim Elleen. After creating a few dresses for herself, friends and impressed strangers started requesting custom made clothing from the talented designer. Since 2010, business has been booming and it doesn’t look like it’s going to slow down anytime soon.

Her garments have been featured in numerous fashion shows around the D.C. area, in magazines such as Brides, Veux, and Luxe, and worn to countless high profile events. She even created the dress worn by Bliss Magazine’s very own superwoman and Publisher, Maimah Karmo, on the cover of this month’s issue. “To make a dress for Maimah was such an honor. I feel like it is a product of the greater D.C. area’s vibrant fashion community and close connection to a lot of charity organizations,” said Atkins when describing how elated she was to have the opportunity to design a custom dress for the cover of Bliss.

Kim’s passion lies in her ability to showcase herself as a custom clothing designer. Unlike men, women often do not have access to custom apparel such as evening wear, wedding gowns, or even one-of-a-kind cocktail dresses. “A proper fit is so important in order to look your best and feel your best in order to project your best self,” explains Atkins. The brand, Kim Elleen, is not solely about the clothes that don the company’s name but about how those clothes make the wearer feel. If a woman puts on one of Kim’s custom designs and gains the confidence to pursue her goals and dreams, then she has accomplished her goal as a designer. Kim Atkins believes that each client is an extraordinarily unique entity that deserves to have a garment that reflects her individual self. “There can be a lot of pressure in the fashion industry, or in any career, to try to label yourself and fit yourself into a category; but if you don’t fit into a category, that’s ok,” said Atkins when expressing why custom fashion designing is so important to allowing women to embrace their individuality.

Fortunately for the fashion world, when the going gets tough, Kim Elleen Atkins keeps going. She has endured many sleepless nights in order to meet deadlines. She has stood her ground when people tried to stray her from her unique vision. She has succeeded in a world that believes you can only pursue one career at a time. Kim is a mover and a shaker that never lets fear or doubt hold her down. “By keeping my mind open and keeping myself open to big possibilities, big things came out of it,” said Atkins. “Be open to the universe of possibilities!” Kim Atkins embodies what living a life of bliss is all about; confidence, strength, and perseverance. Until her next fashion show or magazine appearance, I am certain that Kim will continue to spread her message of positivity one dress at a time.